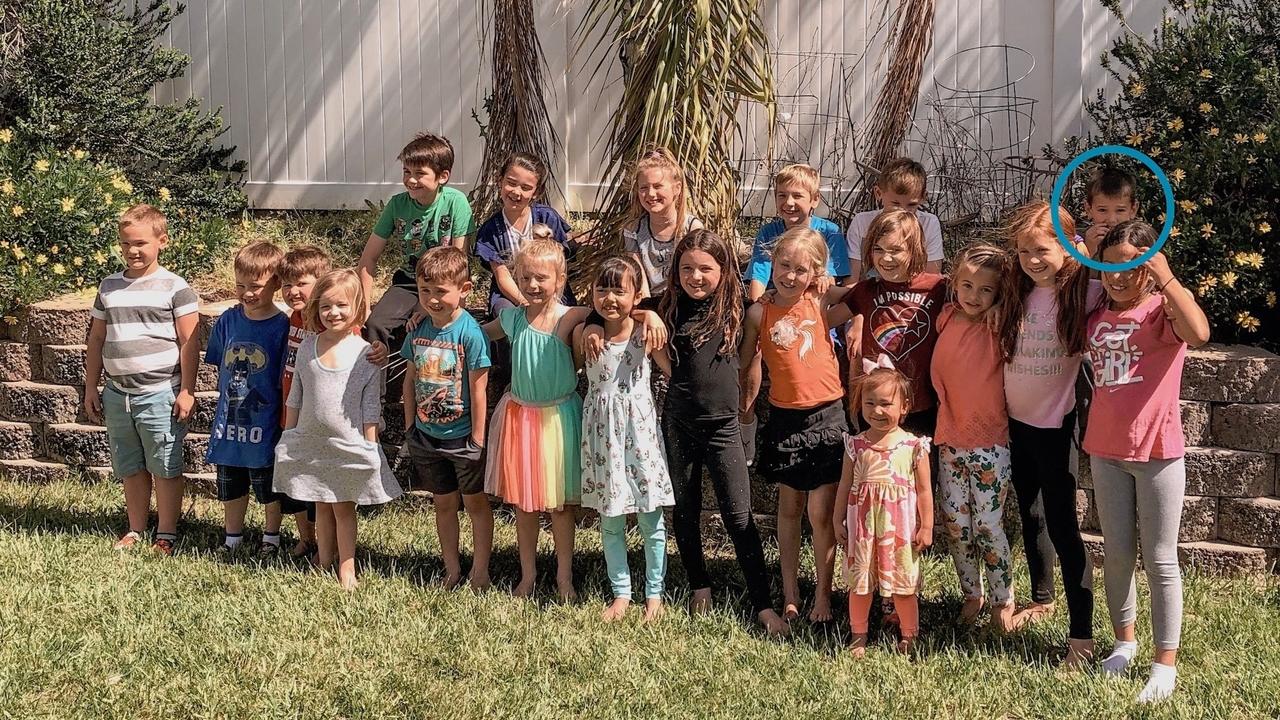 We went to a birthday party. There were a lot of kids, as you can see. (Tosh is top row right)

The party lasted three hours, he ate way too much candy and cookies and there was a bounce house and balloon fights. It was extremely stimulating.

And yet, for the first time ever, NOT ONCE did I hear somebody complain about his behavior. No Tosh pushed me, or Tosh took my toy, or Tosh won’t stop kissing me, or Tosh won't stop screaming.

He even sat still on a stone wall and waited patiently for the other kids to line up for a photo.
​
Now, you can see him sitting off by himself in the photo. He stayed in the jumper with the little siblings while the other second graders went inside to watch Mary Poppins Returns. He didn't always participate like his neurotypical peers.

But who cares? He did plenty of things with them and most importantly, he had a freaken blast without having to be corrected all afternoon.

I credit at least part of this experience to his amazing behavioral therapy team. ABA gets a bad rap in many circles. I've seen it called abuse, the cause of PTSD in autistics and compared to gay conversion therapy.

The assumption is that ABA aims to eliminate all autistic behaviors to make the child appear as normal as possible. And the alleged motivation is parental embarrassment.
Maybe there are some ABA providers out there that sell their services this way. Maybe that’s the goal of some parents.

But that’s not what’s happening here. Tosh’s ABA provider lets him be himself. They encourage the games he plays with his alphabet animals. They let the kids stim and provide sensory supports. They are sweet and loving and only want him to be the best version of himself that he can be.

The behaviors that draw stares, like loud nonverbal noises, playing with age inappropriate toys or not caring about the latest movie, aren’t important to me or his ABA team.

And with time, as neurodiversity acceptance improves, I don't think those behaviors will be very important to anyone. In fact, the only people who have a problem with his autistic behaviors that don't cross the line into unwanted physical contact or disruption are older people.

His peers accept him. In fact, we entered the party to a chorus of “Tosh! Tosh is here!”
​
If you're scared of trying ABA therapy because you've heard horror stories, don't give up. I was very hesitant at first and refused to do it until he was almost seven years old. I read every last word of my provider's fine print before sending Tosh to his first session, observed his behavior very closely for any signs of abuse and decided I would give it six months and if I didn't see any improvement or felt uneasy about anything, we would quit. I also insisted that his provider work with me, not dismiss my concerns or put their own plan into place without my input.

​Not only does our provider accept my input, they encourage it.

I've done a complete 180 on my opinion of ABA therapy. Tosh is still himself, but he interacts more with both autistic and neurotypical kids, he's learning (both academically and in speech therapy) and he can do more things in public, which makes him very happy and will lead to a more fulfilling life.