Nonverbal autism homeschooling: where to begin 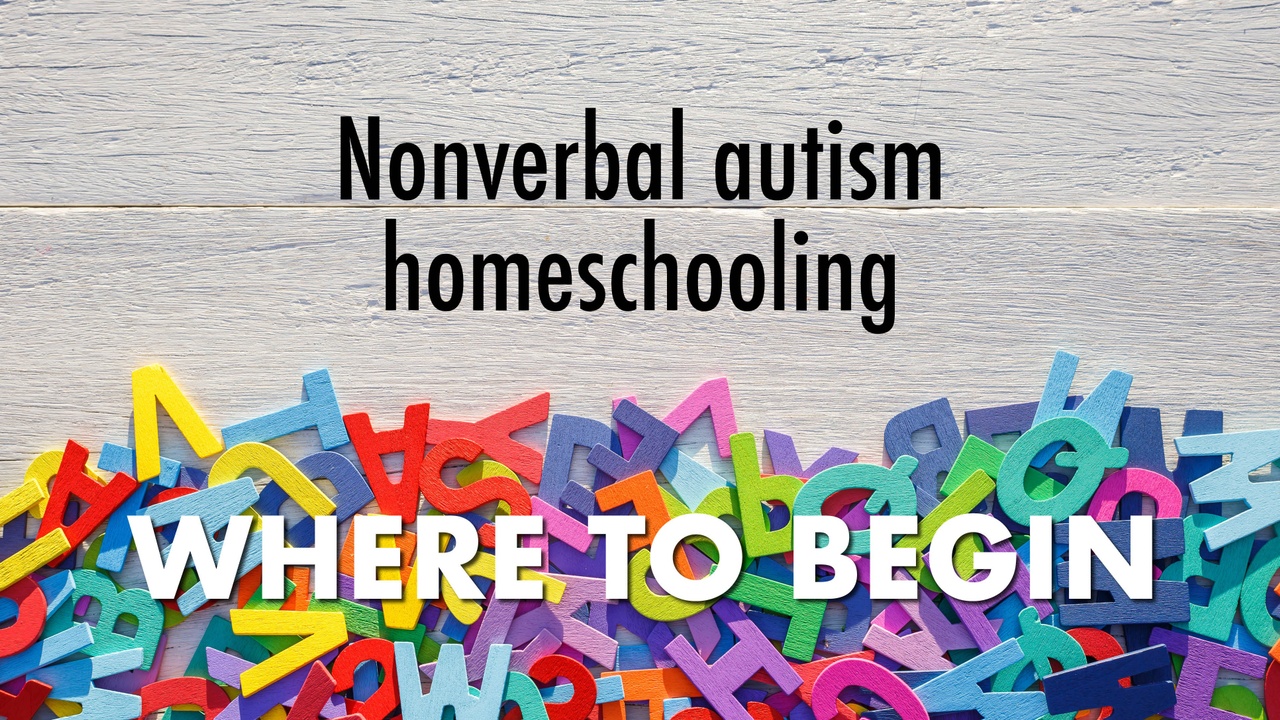 This month marks our two-year homeschooling anniversary. Despite genuine care and effort by his public school team, my son Tosh wasn't making much academic progress. He was clearly bright, but there were major obstacles getting in the way of his education.

At the top of the list was his inability to conform to classroom behavior expectations. His only option was an isolated special education class for severely impaired students. In that chaotic setting, nobody learned anything.

He also lacked expressive communication skills. He was quick to master special education task boxes, which don't require language. However, task boxes aren't going to earn him a diploma or get him anything besides repetitive work. To reach his potential, he needed to learn to read and also communicate using language in some way. Whether that method is writing, typing, using an app, using a letterboard or whatever miracle science and technology will give us next doesn't matter. He just has to learn one or more well enough to get his point across.

Those obstacles to learning aren't unique to Tosh. Most nonverbal students aren't academically successful for those exact reasons. However, public schools aren't equipped or funded to provide a more effective learning environment for nonverbal students, and nobody likes higher taxes. Additionally, not enough emphasis is placed on developing expressive language skills. Nonverbal autism is a severe communication disability, yet many students only receive an hour of speech per week. Furthermore, in a public school setting, parents don't participate in speech therapy sessions and aren't trained to support expressive communication acquisition at home.

It's like the riddle, "how do you get to Carnegie Hall? Practice!" Forcing an apraxic brain to expressively communicate is as much physical therapy as mental. In order to get the communication train rolling, you have to work at it every day.

Given the nature of their disability, nonverbal students score very poorly on IQ tests, which results in false intellectual disability diagnosis. According to a Canadian study, as many as 75% of nonverbal students placed in special day classes for profoundly impaired students actually have normal or above normal intelligence.

If competence is not presumed, and if expressive language is required to gain access to academics and move forward, nonverbal students aren't even exposed to curriculum that is appropriate for their age and intelligence.

No wonder they're so angry!

If you'd like to try homeschooling but have no idea where to begin, here is the approach I've taken.

1. Everyday we work on reading. We use a phonics based system that is great for nonverbal students and can be easily adapted to students with motor skills challenges. Tosh also does a reading comprehension worksheet every day. He is required to use expressive language for these subjects, and this is where the majority of his expressive language happens.

2. Everyday we work on math. Tosh is learning grade level math, but he's moving at a slower pace than his neurotypical peers. I require participation, but not a lot of expressive language. What does that look like? He's expected to pay attention and count, use a calculator or multiplication chart,  point at what step to do next and write the answer. Most of the time, this is done hand over hand or with significant assistance. That's okay, he's still learning.

How do I know? Because I look for proof of mastery using his available communication channels, rather than demand it on my terms. Using this approach, I see mastery often. For example, I see it when Tosh gets excited anticipating a math process he enjoys, like regrouping or using multiplication tables, when that's exactly what the problem requires him to do next. I see it at the beginning of each new school year, when he begins with review work from the previous year and nails it. I see it in the way he arranges toys and his artwork, no longer in a straight line but in equal group arrays.

This is what presuming competence looks like in a child with a severe communication disability. It's difficult for those who don't have an intimate parent-child relationship with a student to see these signs, even educated experts. It's subtle and unique to every student, which is why parents are so much better at teaching their kids than teachers managing an entire classroom.

3. Every day we use his AAC device to communicate outside of school. Obviously we start with requests, but we also review his schedule for the day and any variants. He's slowly gaining the ability to communicate why he's upset, which has been the greatest lesson learned to date, more valuable than any academic subject. Just last week he began a meltdown with self-injuring behaviors. With enough calm prompting, he was able to reveal that he didn't want to eat breakfast because he wasn't finished rearranging his artwork. Keeping it real, he didn't state it that eloquently. He said, "I want tape. More." But it got the job done. I explained that first he can eat his breakfast, then he can return to his activity. Within seconds he was fine. Like, literally from sobbing and biting himself to happy, just because he was able to communicate his concerns and be provided with an acceptable solution.

Parents must learn to use AAC along with their students and use the tool in every day life. I know devices are expensive, but owning your own device and software guarantees your child's unrestricted access to communication and accelerates their progress dramatically. We use an iPad and Proloquo2Go, both purchased with the assistance of grandparents. The iPad is older and refurbished, too.

4. He is also exposed to grade level literature, science, social studies and art. I approach this like math: he has to participate and show some understanding of the topic, but independent expressive language is not required. We usually select multiple choice or other formats for schoolwork that require as little expressive language as possible, just enough to satisfy the state.

5. I use errorless learning methods. Traditional education uses trial and error learning, where students are asked to answer a question even if they don't know the answer. Trial and error doesn't work for autistic students because many of them have auditory processing issues and can't learn from oral instruction only; they learn by doing, not hearing. Autistic brains also lack neuroplasticity. Once an idea is etched in their brains, it can be very difficult to change. That means if they guess the wrong answer the first time, that may forever be the only answer.

Errorless learning shows your student how to learn rather than telling them, and ensures they learn correctly. In practice, this means first showing them how to answer the question. Continue showing them how, using hand over hand or prompting, until they begin answering at least part of the problem on their own. Don't expect 100% right answers to allow them to move forward! Verbal kids aren't required to score 100%, and neither is your student.

6. All service providers are working toward common goals. I've signed every release form imaginable so Tosh's school and private service providers can freely share data and information to create a network of support. For example, Tosh struggles with behaviors that keep him out of the classroom, but he's very social and desperately wants to be in a mainstream class. So, we've made private ABA part of his education. Most of his ABA goals center around supporting his education; in fact, his ABA therapy supervisor attends his IEP meetings. School therapists have also attended ABA progress meetings. Not only does he work on classroom behavior (he and his ABA therapist attended in-person enrichment classes with homeschool peers once a week before COVID hit), he also learns to attend to nonpreferred tasks like homework. After two years of hard work, Tosh has developed the grit and determination to grind through gaining expressive language, doing homework and tolerating classroom subjects he doesn't find particularly interesting. These are valuable life skills for anyone and will serve him well as he builds his unique life in the big, wide world.

These education strategies allow Tosh to make academic progress while also improving his expressive language skills. One day, the two efforts will align to produce a student who can communicate academic mastery at grade level, and earn a diploma and beyond. This isn't wishful thinking: I follow many nonverbal adults on social media and in larger media, and most of them share the same success story of a parent who homeschooled them, attended in-person school as their aide or found a special aide who was able to "see" their intelligence and nurture it. There isn't a roadmap for successfully educating nonverbal students, but thanks to social media, we have access to those who have done it, and we can learn from them.

Ultimately, the success of Tosh and others like him will serve as examples that will drive education reform and make education and communication available to everyone.